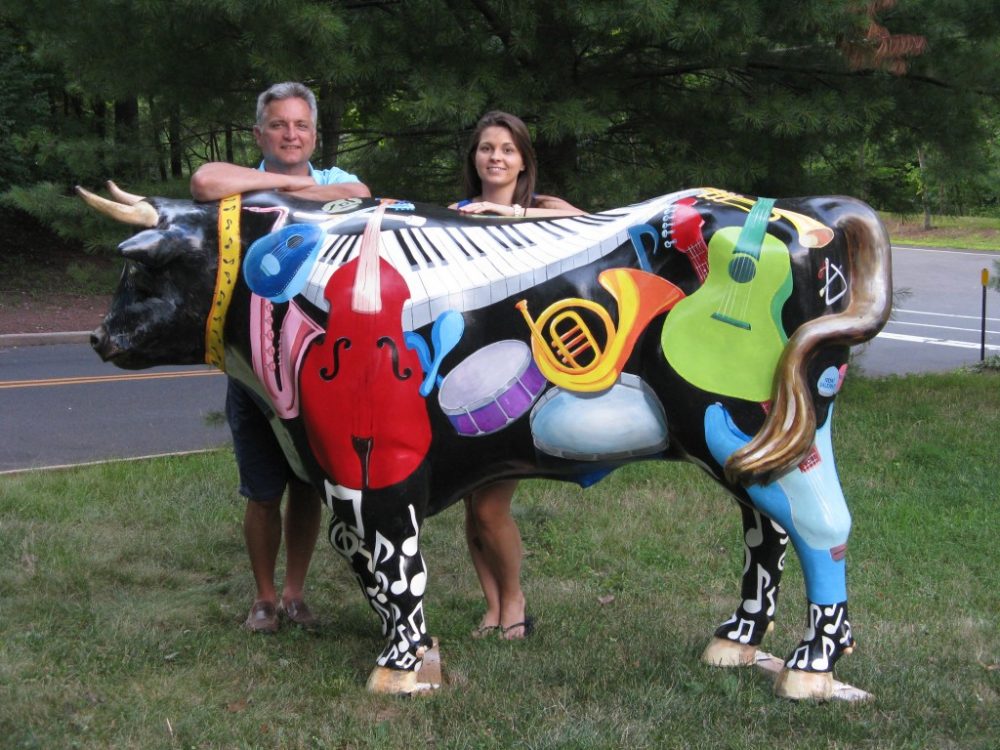 Residents and commuters driving down just about any main drag in Hopewell Valley will notice that a colorful group of fiberglass oxen have taken over the area.

By the time the Hopewell Valley Arts Council is through installing them, a “stampede” of 68 oxen, decorated 68 different ways, will be roaming around the township and two boroughs.

“There’s a lot here and so part of what we’re doing initially is trying to make people more conscious about what’s going on in the valley,” said Liz Bell of the arts council.

The oxen will be stationed along roads and at farmstands, parks, farms and commercial plazas, she said. Some have flowery designs, while others tap into the character of the area, such as one painted with the famous rendition of George Washington’s crossing of the Delaware River.

“These have been situated throughout the valley in order to maximize the ability to see them,” Bell said.

The oxen arrived, blank of any design, in March and were embellished by different artists and organizations from the community, she said.

In recent days, volunteers have begun towing the oxen out on a flatbed truck and installing them at locations throughout the valley.

The life-size creatures can already be seen by the Pennington Quality Market, the Stop & Shop and a number of other spots in town.

The council will soon have a map available in local stores and on its website, hvartscouncil.org, showing where each ox can be found.

The arts council strategically planned where to put the oxen so that “they would be something that would pop into your life as your driving down the road,” Bell said.
The herd of oxen serves a variety of purposes.

The arts council hopes to make residents more aware of the culture that already exists in the area, and expand their participation in it, Bell said.

About half way through the two-month exhibition, the council, which is just more than a year old, will begin to auction off many of the oxen to raise funds for future programs, she said.

But there is a more basic benefit to having the oxen take over the valley, she said.