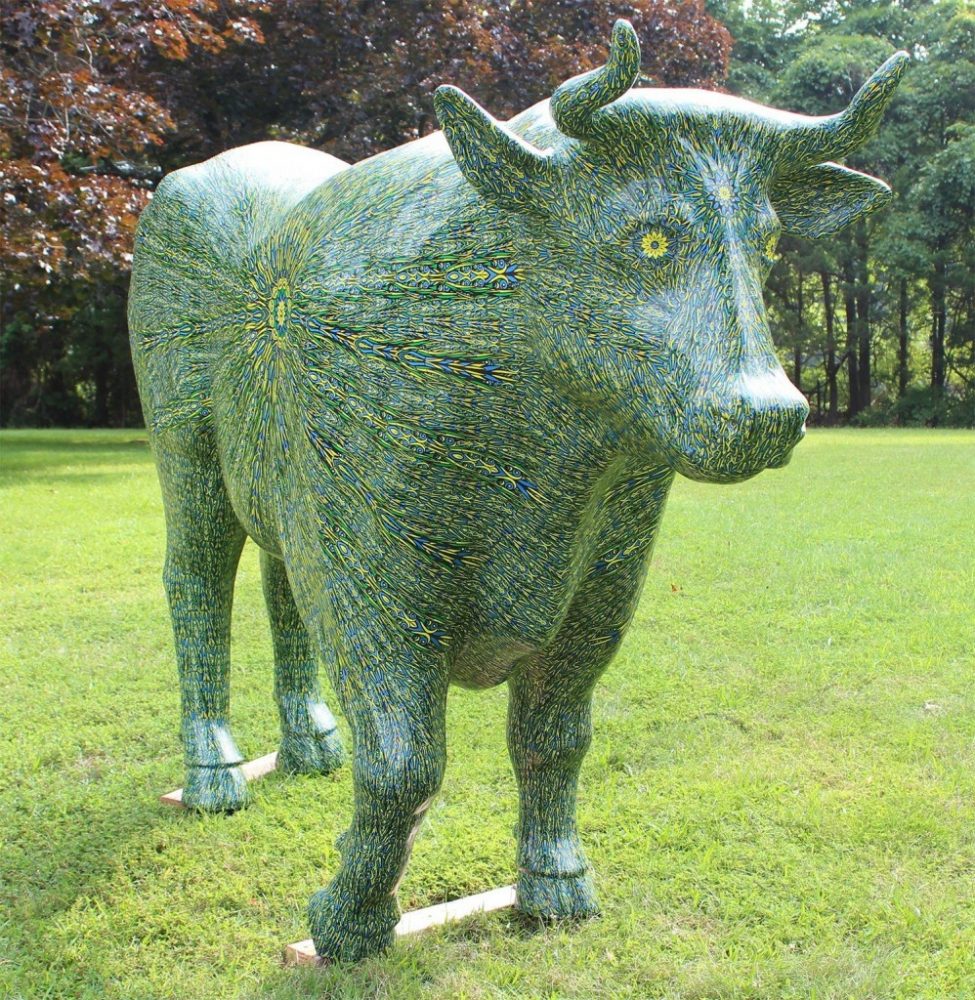 By now, most everyone in this region’s art community knows about the Hopewell Valley Arts Council’s 69 fiberglass oxen that were given artistic personalities by local artists and spent weeks on display throughout Hopewell Valley.

The group held an online auction for 33 of the oxen in “The Stampede” project and raised more than $73,000 by the time it ended in October. Another 11 oxen are being offered during a live auction and dinner Saturday at Grounds for Sculpture during an event dubbed the “Ox’tion Gala.”

Among of the oxen being auctioned Saturday is Dana Weekley’s “Think Inside The Ox,” which is covered in yellow, blue and green mandalas. In August, three independent judges with strong credentials selected Weekley’s entry as first place overall for the project.

Weekley says she never thought of herself as an artist even though she spent hours drawing with her Spirograph as a kid and staring down into roses when she worked with her father in his flower business. “Think Inside the Ox” by Dana Weekley.courtesy photo

She wanted to be a math teacher but when Weekley took night school courses at Rider University in calculus, she also took a studio art class with Professor Harry A. Naar — and dropped out.

“I was trying to make it all perfect and just couldn’t do it,” she says.

It wasn’t until 2007 when she was drawing with her 7-year-old old son that she found her artistic inspiration.

“He was just drawing, abstract, and I would be looking around for something outside myself to draw,” Weekley says. “I asked him what I should draw and he said, ‘draw what’s inside you.’ It was like it burst upon me and I knew at that moment it had changed my life forever.”

Before that I had been controlling, critical and judgmental about my work. I looked outside myself, and was intimidated by a blank canvas—a metaphor about how I lived my life in general. When the art channel opened, it began to, and still does, guide me through transformations toward self-realization, personal freedom, present moment awareness, self-love and trust in God. A far more powerful perspective, to be sure.”

Soon her drawings evolved into the mandalas she does today. They began as black and white drawings and then color flooded into them. Now Weekley prints her kaleidoscopic designs on fine matte papers, on canvas, on fabric for wall hangings and on vinyl or other fabric-like materials for decals that can be mounted on a wall.

She’d attended the Hopewell Valley Arts Council’s call for artists because she wanted the connection with other artists. But when the idea of the Stampede began to develop, she says the concept of adding art to an ox was intimidating.

She describes several ideas she toyed with before deciding that to achieve the fluidity of design she wanted, it would be best to use glue and paper. She purchased a decorate-it-yourself piggy bank to use as a prototype and began cutting her drawings in strips and gluing them on.

“I think of myself as a scribe, a tool, and I started working on the ox cutting the mandala I had designed for him into strips and gluing them on while I listened to pod casts of spiritual people talking for hours and I loved doing it and cried when he left,” Weekley says.

Then disaster struck. The sealant used to make the ox weatherproof didn’t hold and large sections all over the ox bubbled up and had to be scraped off.

“I had just spent April to September on him and now I had to start at the beginning again, do an underlay and have it meet up properly with the layer that was still there. I cried,” she says. “But then I got over it and, thankfully, my husband stripped and prepped him, I finished, we sealed him with a new sealant and he was better than ever. I cried again when he had to leave the second time. He’d become a good friend.”

And now Weekley is back to making mandalas full time again, beginning to create them using 3-D printing and connecting with people from all parts of the world through her website, ninetomatoes.com, a name she says just “dropped in” on her.

“People have found me from all over the world — deeply spiritual people in Australia, Canada, South America and throughout the States,” Weekley says. “I love working with people making their own mandalas. They send me their drawing, we connect and I get a sense of who they are. Then I move their drawings around and they evolve into their own personal mandala. I love it when people begin to find their essence.”