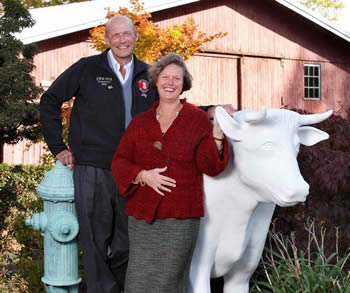 By Times of Trenton Editorial Board
The Times, Trenton
on November 18, 2013

The legendary Paul Bunyan had a sidekick of unusual hue. But even Babe the Blue Ox will have nothing on the drove of oxen set to roam through the Hopewell Valley.

Life-size replicas of the traditional beasts of burden will become feasts of color and creativity for artists signing on to Hopewell Valley Stampede art-awareness project.

The project echoes others in cities and regions around the world that have tapped into local talent to illustrate a symbol of the community. In Bucks County, for instance, hundreds of mules were decorated and placed along the Delaware Canal towpath where mules once hauled cargo-laden barges.

For Hopewell Valley, in a nod to the region’s agrarian past that depended so much on plow animals, organizers chose oxen.

The project is now it the preliminary stage. Artists have until January to submit designs for the 8-foot long white fiberglass canvases. Based on those designs, each artist will be paired with a sponsor who has agreed to subsidize the cost of the creation.

The finished herd of about five dozen oxen will then be distributed through fields, schools and business centers over the summer and fall. In January 2015, they will be auctioned off to raise funds for the newly formed Hopewell Valley Arts Council.

Proceeds of the sales will fund future projects and events to increase awareness and appreciation of the arts in Hopewell Valley, including the visual, culinary, literary and performing arts, Lisa Coryell reported in The Times. The group is also looking to help fund a permanent center for artistic pursuits.

It’s a wonderful way to involve –- and unite — the communities of Hopewell Borough, Hopewell Township and Pennington.

Just imagine the surprise of coming across a massive ox with painted pelt on the familiar way to work or school or seeing a decorated beast standing sentry in a field.

The sudden displays of imagination represent more than just a creative way of raising funds. They demonstrate that art need not be confined to a museum or gallery, withheld in a frame or stood up on a pedestal, to be considered art.

In this region, we are fortunate to have the works of Seward Johnson and other sculptors springing up unexpectedly along the road to Grounds for Sculpture.

Some may sniff that the enormous statues representing famous paintings – or a drove of colorful creatures — do not constitute art. That is for the beholder to decide.

We’re looking forward to beholding the stampede of oxen heading this way.