Arts Council to Stampede into Hopewell 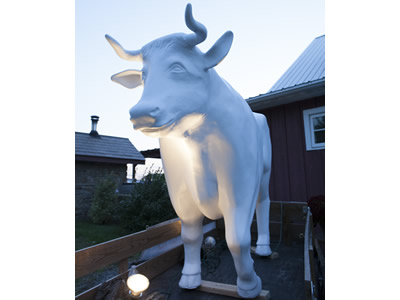 Next fall, Hopewell and Pennington will be invaded by oxen — yarn-covered, painted, and even abstract looking oxen.

The newly-created Hopewell Valley Arts Council is planning a “stampede” as its first major fundraising effort. The plan is to have local artists compete for the chance to decorate large, fiberglass oxen provided by the council.

So where does money come in?

Sponsors will pledge money to have oxen dedicated in their name, along with some influence over the ox’s fate. Many of the oxen will be sold at auction, and the money will go to helping the fledgling arts council off the ground.

Meanwhile, some of the oxen will be permanent fixtures in the neighborhood, the first mark by a new nonprofit group intended as a a resource to connect local artists of all kinds.

It might sound far-fetched as a moneymaking idea. But cities around the world, such as Lambertville and Saratoga Springs, N.Y. have tried the same approach, reportedly with fundraising success.

“Cows have been done, dogs, starfish. You name it they’ve all been done,” said Linda Bradshaw, who is leading the arts aspect of the fundraising effort.

Bradshaw is a retired art teacher who taught for 26 years at Hopewell Elementary, Colgate, and Bear Tavern. She is also a seasoned watercolorist who has found time in retirement to paint every day.

Organizers said the oxen, once they are decorated, will be displayed all over the area, including on Broad Street in Hopewell and on Main Street in Pennington. Some may be clustered in herds, while others will stand alone. Expect to see them anywhere—on the side of the road, in the center of fields, or right in front of town storefronts.

Bradshaw drew the original oxen sketches that later became a sculpture that can be reproduced repeatedly and provided to many different artists. The first sculpture, still undecorated, has been nicknamed Ollie. He was introduced to locals riding on a float in the Hopewell Valley High School homecoming parade on Friday night.

Ollie is a daunting figure, standing at 8 feet long, 5 feet high, and nearly 3 feet wide. He was designed to fit through a doorway, organizers said. Ollie was cast in fiberglass, weighs 75 pounds, and has steel reinforcement in his horns and joints. L-brackets in his feet protrude out, so he can be secured to a base, making it harder to tip him over when sculptures of his likeness are placed all over town.

After Bradshaw sketched the initial oxen design, it was sent to the Theme Factory in Philadelphia, a props shop that specializes in custom processes such as vacu-forming, rotocasting, foam and other resin casting, mold creation, sculpting and woodworking. The shop says it can use virtually any form of material to produce the desired product.

For the stampede project, the Theme Factory constructed a mold out of sheets of foam to create Ollie and the rest of the oxen for the stampede.

The fabricators also drew on photos of real oxen to create Ollie. The sculpture is marked by such details as veins running across Ollie’s musculature to make him look sturdy and true to life. Bradshaw said the oxen design has “spunk.” The ox has a little grin, and a cocked head.

When the member of the arts council met Bruce Konefsky, president of The Theme Factory, they knew it was a match made in heaven. Konefsky has a background perfecting slightly off-beat art assignments.

Konefsky’s parents started the Theme Factory in 1978, providing themed sets for parties held by Fortune 500 companies. For instance, one set has a Philadelphia theme, and includes Betsy Ross’s house and Ben Franklin’s print shop. Konefsky has a long history in theater arts, including set design.

Konefsky may be one the few people in the world who would immediately understand what the ox project is all about. He had worked on similar projects in the past, including the “Miles of Mules” art installations in Bucks County, PA, a nearly identical project except with a different animal.

Konefsky dedicated a solid block of time to creating the ox for the arts council. It was six weeks of carving, prepping, molding, he said. He gave a lot of thought to how to portray an ox and what its most notables features are.

“An ox is a beast of burden. It’s not mean. It’s not whimsical. It has a sense of dignity; it works hard. It’s a statement about labor. The ox continues to work for you day in and day out whenever you need it. So it’s not really frowning; it’s not smiling; it’s not angry or sad. It’s durable, sensible, and, dignified,” he said.

When the stampede of oxen are ready, artists will compete to leave their own mark on the sculptures. They will each receive a $750 stipend for the project. Bradshaw said she expects the designs to run the gamut.

“I hope each participant will create an artful, dynamic oxen. It’s flexible. You can certainly dress him,” she said.

That’s welcome news for a group of knitters that has already said it wants to knit ollie some clothes. The group says it would wrap the yarn around him loosely, so that after some rain fall, the clothing would shrink and the sculpture would be dressed dapperly. The arts council is also open to highly abstract designs from artists who can prove their expertise.

Students will be included in the effort. The arts council is giving each of the schools a chance for students to compete to decorate one of the oxen.

It all dates back to a bet on the 1987 Super Bowl between the Broncos and the Giants. The governors of Colorado and New Jersey bet a steak dinner, and Colorado lost.

“Well, after the Giants won, hence the name, the Colorado governor sent a whole steer, fer (sic) goodness sakes. Rather than treat his cronies in the State House to steaks, the New Jersey governor did the right thing and gave him to Howell Farm,” the story goes, as rendered by Howell Living History Farm.

Bradshaw also said the symbolism of the ox made it a good face for this project.

“To the committee, the oxen symbolized a sturdy, steadfast, purposeful life, and we feel very strongly that we want Hopewell Valley Arts Council, and particularly the stampede, to move along that path,” she said.

After the oxen go on display next fall, they may need to undergo some repairs to recover them from any stresses, such as weather, before they are auctioned off. Another potential stress organizers are wary of is vandalism.

“There’s always a concern with outdoor scupture that it will sulfer not only from weather but also the vageries of the town,” Bradshaw said.

So far, the project has firm financial footing, according to Randee Tengee, an organizer. It already has five donors who have pledged $25,000, she said. That includes Capital Health, Hopewell Valley Community Bank, Betty Wold Johnson, Morehouse Engineering, and one anonymous donor.

The Hopewell Valley Arts Council, a brand new organization, says it is dedicated to celebrating art in the everyday.